A Sense of Humor Defensive Driving is one of the oldest names in Texas defensive driving. Starting as a classroom provider in 1992, they became one of the first companies to offer online defensive driving for Texas drivers in the early 2000’s. Since its inception, over a half million drivers in Texas have used the company’s courses to dismiss tickets and/or save money on auto insurance. But with all the changes in the driving environment (and the internet) in the last 20 years, has A Sense of Humor passed the test of time, or has time passed it by?

At the Dawn of Online Defensive Driving, A Sense of Humor was There

After a dozen years of success as a multi-location classroom defensive driving provider, A Sense of Humor decided to make the jump into online defensive driving. This delivery method was in its infancy as it had only recently been approved by the state. As there were only a handful of online providers at the time, the time seemed right to give it a chance. However, jumping into online at this particular moment in history had both pros and cons, even for a defensive driving leader with a long, successful track record like A Sense of Humor.

Being the first to a new world poses both risk and reward. As an early adopter, the company had few competitors. This was good, as the customer base was limited. It’s not that there were fewer speeders in those days, it’s just that all of them were used to a system where dismissing a ticket required sitting in a roomful of strangers to listen to what amounted to a six hour safe driving lecture. A beating to be sure but, for years, the only way to get the job done. The idea that the same benefit could be earned from the comfort of your own couch was unheard of.

Another potential pitfall of this timing was found in the approval process and in the development of the internet. The state was kind of making this thing up as it went. This made for courses that were uneven and poorly structured. Further, as much as this seems like ancient history now, remember that many internet users in the early 2000’s were still suffering through dial-up connections. This meant that courses were forced to rely on heavy text usage. I don’t have to tell you that reading 6 hours worth of text at the state required 180 words of text per minute was quite a beating. Alternately, buffering times for a course that tried to make themselves more palatable through the use of video made the experience every bit as tiresome as sitting through a class in person.

How Did A Sense of Humor Start and Does it Hold Up Today?

The Sense of Humor classroom version was one of the best in-person defensive driving courses ever conceived. It was highly interactive, filled with improv and class participation elements. Even those students who entered with chips on their shoulders never failed to leave with smiles on their faces. High energy instructors made pleasurable what was potentially a chore.

The problem A Sense of Humor had was taking that energy and interaction and translating it into a format that would work in a one-on-one, alone in front of a screen situation. To be honest, the course was hit and miss in its efforts. Making teaching points in a game show format works well in a roomful of people but in the attempt to make it a “home version,” not so much. Fortunately, this shortcoming didn’t affect student numbers in the early days because there were precious few other choices for online courses. Unfortunately, as more competitors entered the industry with courses more suited to the format, sales began to suffer. Doubly unfortunate, A Sense of Humor didn’t adapt well and slipped from pioneering leader to also-ran.

The Old Man Gets a Facelift

A Sense of Humor Defensive Driving was purchased in 2016. While the company that bought it was a competitor, the founders had a history with and an affection for the Sense of Humor brand. They saw the value and legacy in the brand and began work to restore it. The following review is of the rebooted incarnation of the course.

From the beginning, the host of the Sense of Humor defensive driving course has been a character named Eddie. Eddie takes students down the light-hearted path of his humorous journey of becoming a more defensive driver himself. Along the way, students also meet his wife Betty, his two kids Ginger and Garth and even his dog, Harvey. The first step of the retooling was to move Eddie to some new surroundings. 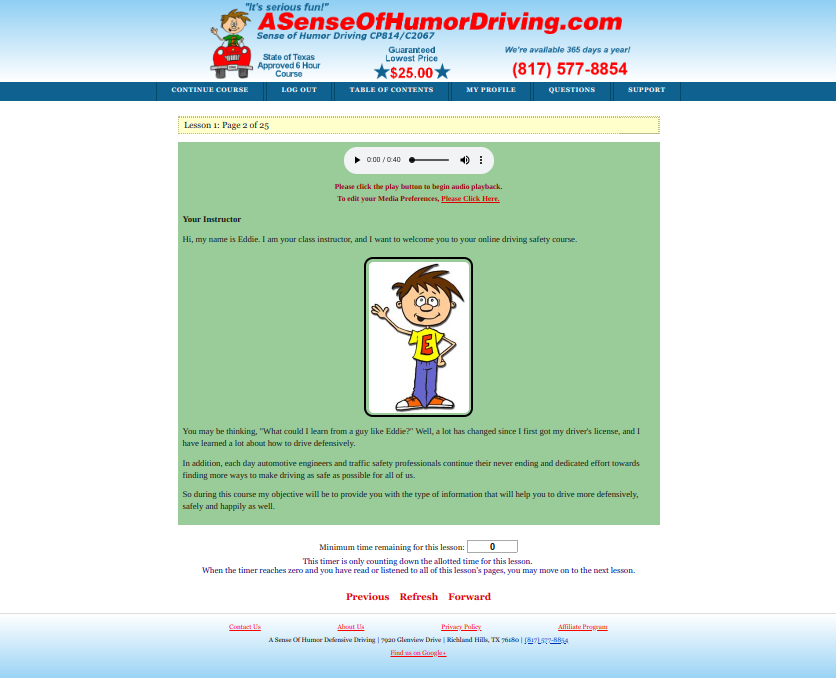 Eddie’s first digs. Hey, it was the early days of the interwebs, remember?

We think that you’ll find the new Sense of Humor interface much easier on the eyes. 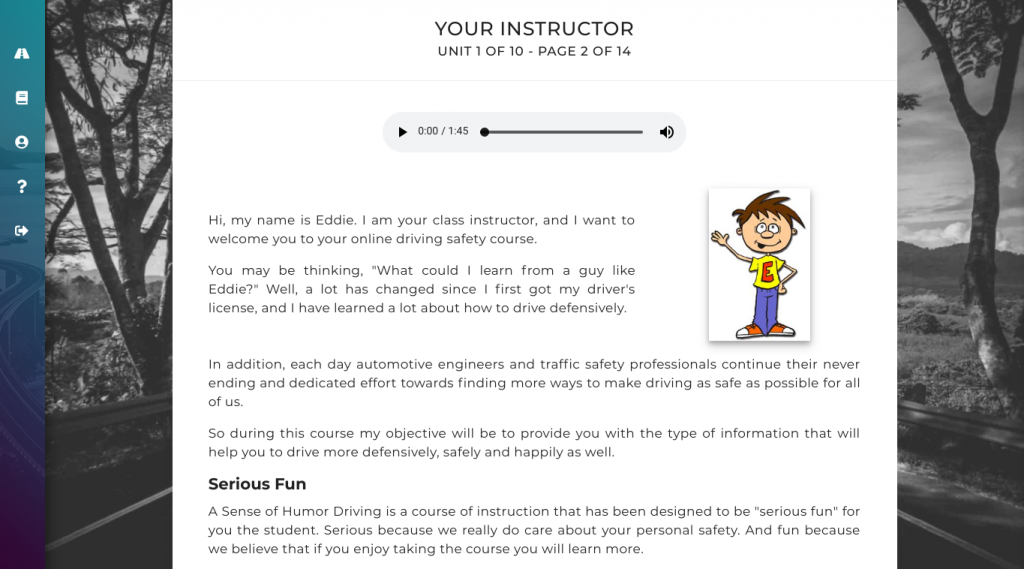 Alright, he might not be any more clever, but at least it’s not as hard to look at him where he is now

One of the selling points of online defensive driving is convenience. You can take the course at your own pace, from anywhere and at any time. With the ability to start and stop at will, you can tailor any course to make it completely convenient to your schedule.

Since the state requires all courses to cover the same material, what makes one stand out over another? As with any website, user experience makes all the difference. What are some ways that Sense of Humor addressed this in their rebuild? Here’s one way: 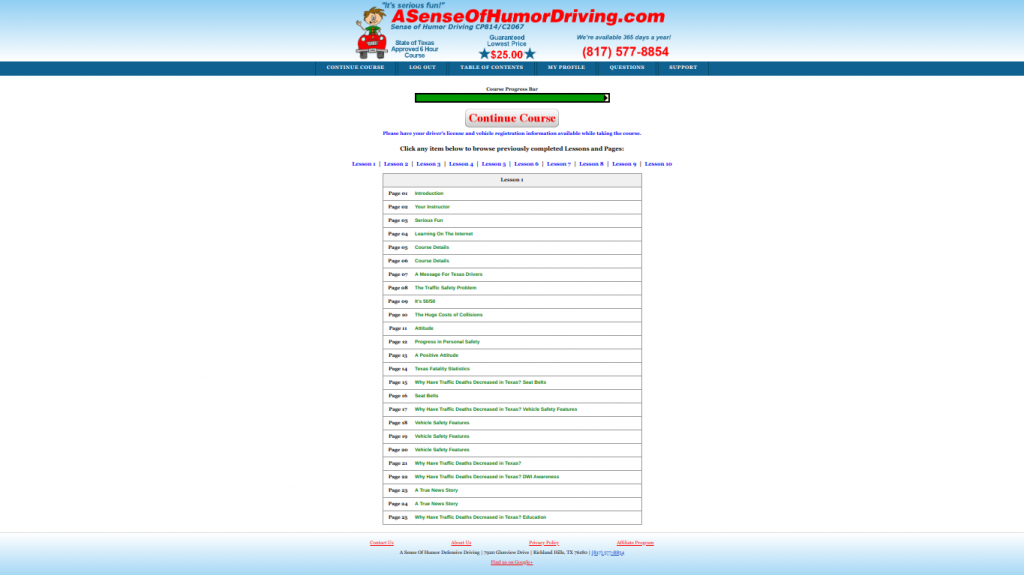 Maybe it would help if you knew what you were looking at. These are the old and new views of the table of contents for Unit 1 of the course. The information contained in the unit is unchanged, it’s just communicated on 11 fewer pages. With that level of consolidation over 10 chapters, it now requires nearly 150 fewer clicks to get through the course. Interaction can be good as it increases engagement, but clicking just to click is a beating.

This high number of pages also served to make what was another potentially positive element of the course less so. To set itself apart from the competition, A Sense of Humor has always offered free read-along audio. This was pitched as a way to make the course easier by “leaving the reading to us.” I guess that would have been true if there hadn’t been 251 pages to click through!

The new look Sense of Humor improves on this situation in a couple of ways. As was stated before, there are far fewer pages. That means that you can now sit back and actually let the narration do more of the work for you. Further, the narration itself is better, not just because audio technology has improved, but because of some subtle changes to the text itself. Before the update, a lot of the humor in the Sense of Humor course relied on celebrity and cultural references that were nearly two decades old. The text now serves up more giggles than groans.

What Else is Better in This Online Defensive Driving Course?

Another common element to all online Texas defensive driving courses is the presence of state-mandated personal identification questions. Courses are required to feature these questions to ensure that the person registered to take the course is the one actually taking it. Questions about the student’s drivers license, name, address, and vehicle pop up periodically throughout the course and the student has to answer them correctly within 90 seconds. Missing three of these questions results in the student being locked out of their course until they contact the course provider and pass a more stringent identification process.

This is another area where the Sense of Humor reboot makes huge improvements. While the state only requires a course to pose 10 of these questions, the old course had 20. To make matters worse, the questions were poorly worded and far more detailed than the state required. This resulted in a higher than necessary number of students needing to call in to get their courses unlocked. Not the end of the world, but not exactly the pinnacle of user-friendliness, either. The reworked course has set the number of ID questions back to 10 and instead of requiring an exact typed response, they are in a multiple-choice format. Now it’s enough to keep your drivers license and license plate number handy to breeze through this state requirement without a hitch.

Beyond these improvements, the course is just easier to look at. If you’re old enough, you might remember when every webpage looked like this: 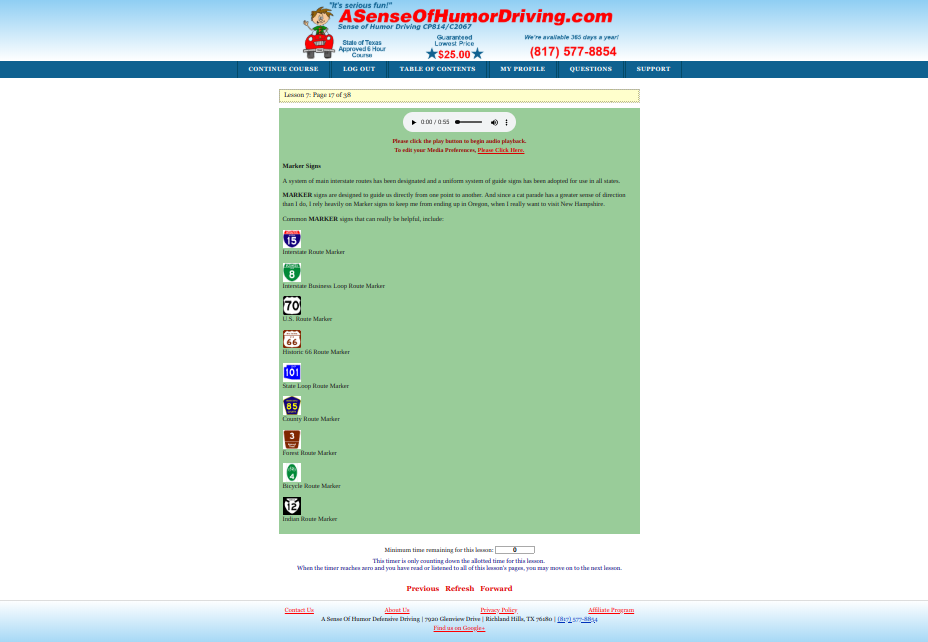 The important defensive driving information in the refreshed version of the course is much easier to see (and look at!), especially on mobile. 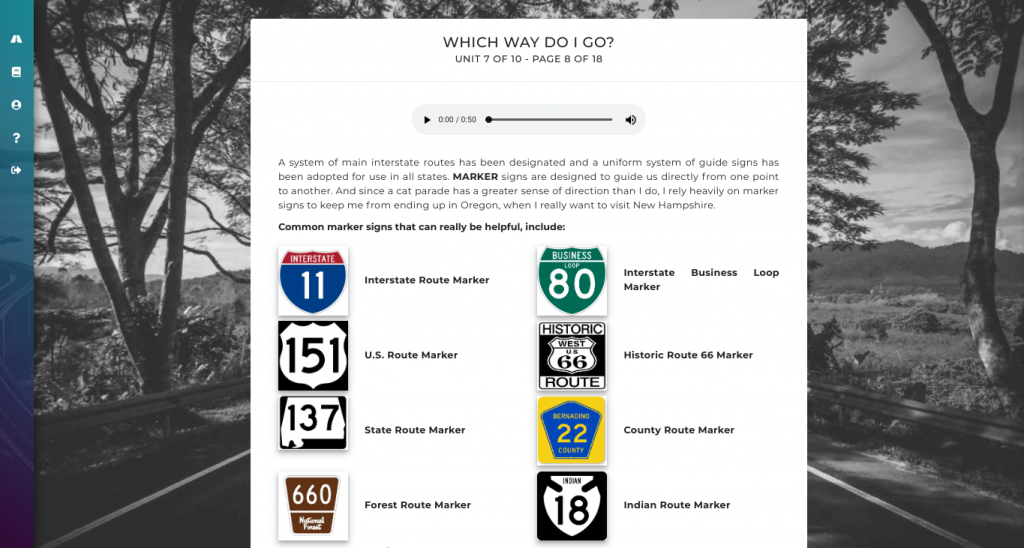 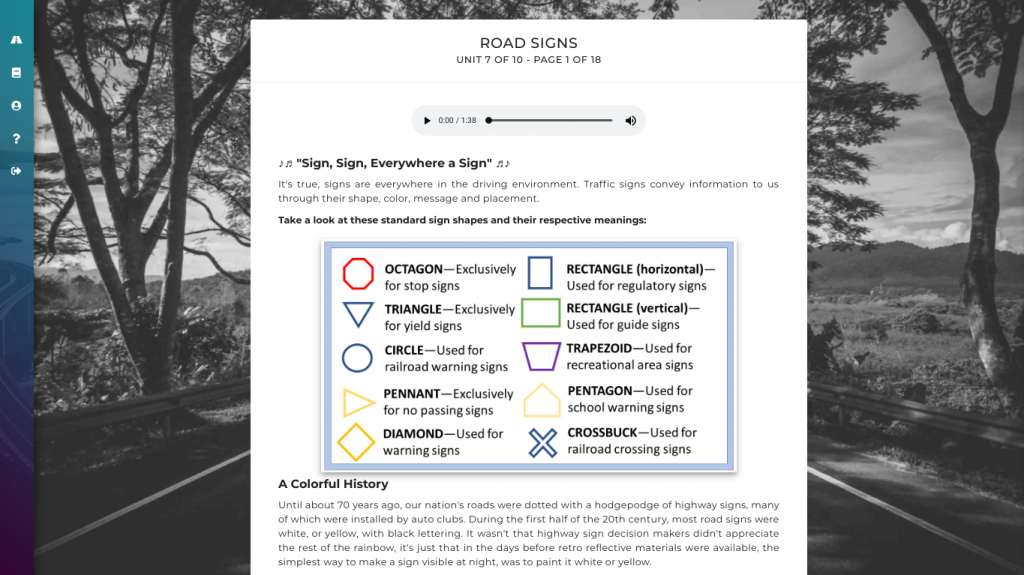 That’s better—icons you can see!

Be honest. Would you rather learn about street signs on 18 pages like these last two, or on 38 of the green kind? Need time to sleep on it? We’ll wait…

As a Final Word, Maybe the Best Change of All

The convenience of online defensive driving is a two-edged sword. Knowing that the ability to take a course at any time from anywhere can lull drivers into thinking they have all the time in the world to get it done. This once posed a huge problem as, in the past, state law required completion certificates (the ones required by the court) be printed on special paper and be delivered to the student by mail. This meant that waiting until day 89 of a 90 day window increased not only the stress of getting the course finished, but the out of pocket expense as well as some sort of expedited delivery method had to be purchased to get the blasted thing turned in on time.

Recent changes in the law have finally given defensive driving course providers the option of offering printable certificates, perfect for the procrastinators among us. A Sense of Humor saw the value in this for their customers and have added this utility to their course.

A Sense of Humor Defensive Driving was a leader 20 years ago by being a pioneering company in the online defensive driving space. Unfortunately, an unwillingness to keep pace with functionality and design created a loss of market share. Hopefully, their recently completed updates will help them regain their status as a legitimate player in the industry.

If you are in need of ticket dismissal or auto insurance discount, you can find out more about A Sense of Humor’s comedy style defensive driving course or you can take our word for how great their course is and register now. While it was certainly a serviceable course in the past, it is actually an enjoyable experience today.